I was very skeptical about vegan cheeses that try to mimic real cheese. I’ve tried a few of them and wasn’t at all impressed, to the point where I decided it wasn’t worth the effort looking for substitutes. I just needed to learn to live without cheese. It was all good until I came across this “feta cheese” recipe in an Israeli vegan blog. Feta cheese was one the things I most regretted not eating anymore since becoming vegan. I LOVE feta cheese. So when I came across this recipe I had to give it a try. And I was pleasantly surprised. It is delicious!! Is it feta cheese? No. But it tastes and feels like cheese and it is salty and tangy enough to satisfy my craving for feta cheese.

So without further ado, here is the recipe. If you are a vegan who happens to love feta cheese, this may hit the spot.

Preparation:
Place all the ingredients in a food processor and process to a smooth puree.

Place a colander in a slightly bigger bowl and drape a cheese cloth over the colander. Pour the puree into the cheese cloth. Tie the corners of the cheese cloth together to make a sack, and suspend over a bowl for 12 hours or overnight in the fridge.

Grease a baking dish with a tiny bit of oil, then untie the cheese cloth and gently place the ball of cheese in the baking dish, face down.

Bake for about 40 minutes, until the cheese becomes golden. Remove from the oven and let cool completely.

Keep refrigerated up to 3 weeks, if it lasts that long…

We like to use it as a spread or crumble it over a salad or any other dish.

It is really surprisingly delicious!

This recipe may look like Matzah ball soup, but it is actually a Jewish Persian dish, very popular among Persian Jews.  It is made of ground chicken and chickpeas.

Gondi, is perhaps the single most unique food to the Jews of Iran. While Persian Jews have over the centuries adopted the Persian cuisine in their kitchen (kosher style, of course), Gondi has been one of their few culinary innovations that they can claim as their own.

It is usually served as an appetizer together with Sabzi – raw green vegetables including tarragon, basil, mint, and radishes. In our home, we used to eat it as a main dish.


Preparation:
In a food processor, grind the roasted chickpeas only until they turn into crumbs. Be careful not to over grind it. You don’t want chickpea flour. You may find chickpea already coarsely ground in Middle Eastern grocery stores. Do not buy chickpea flour. It is too powdery.

Place the chickpea crumbs in a large bowl. Add all other ingredients except for the chicken soup, and mix well by hand, until mixture is well combined.

In a large saucepan, bring the chicken soup to a boil. If needed, add salt and pepper.

Make plum size balls of the chickpea mixture, and add them gently, one by one, to the soup. If the balls stick to your hands, use a small bowl with water to wet your hands lightly.

Lower the heat to medium and cook for about 30 minutes.

Place 1-2 balls in a soup bowl, add some soup and serve. 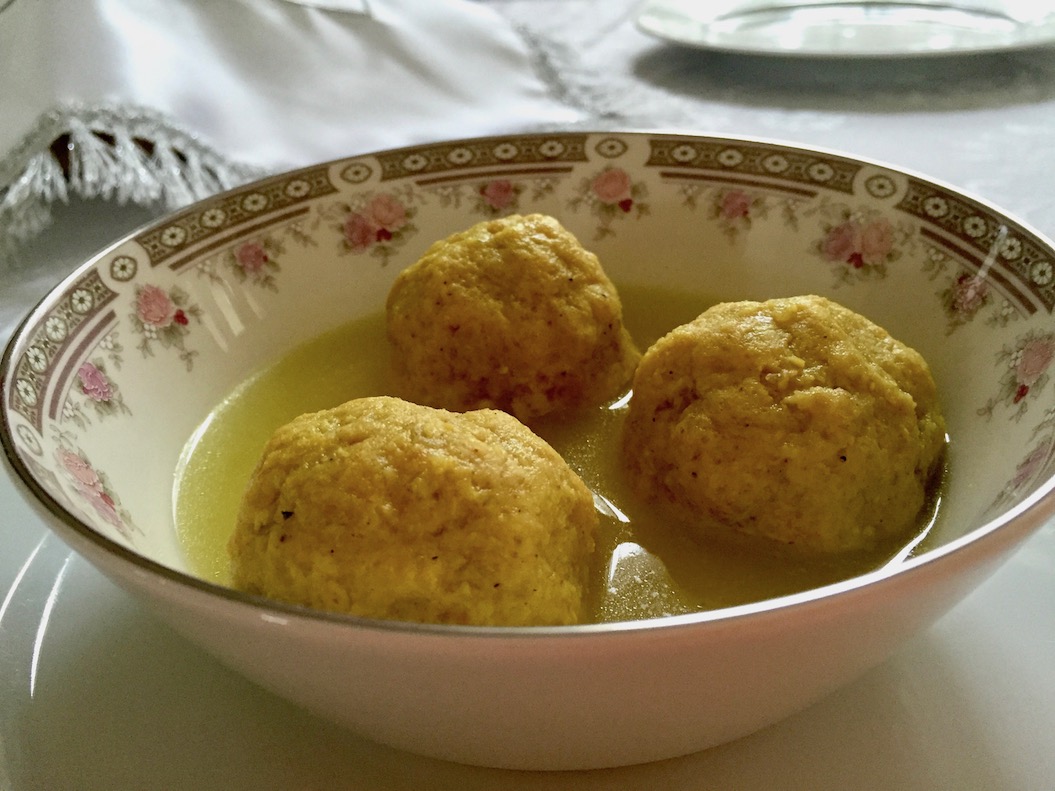 Place the chicken in a large saucepan. Cover with 8 cups of water and bring to a boil. Using a large spoon, clean all the foam formed on the water.

Lower the heat to medium and add the onion, carrots, cilantro, and spices and cook for about an hour, covered.

Discard of the cilantro. You may use the soup as is to cook the Gondi dumplings in, or you may strain it, and have a clear broth for the Gondi.

Gondi is served with a plate of fresh green herbs such as basil, tarragon, mint, and sliced radishes. 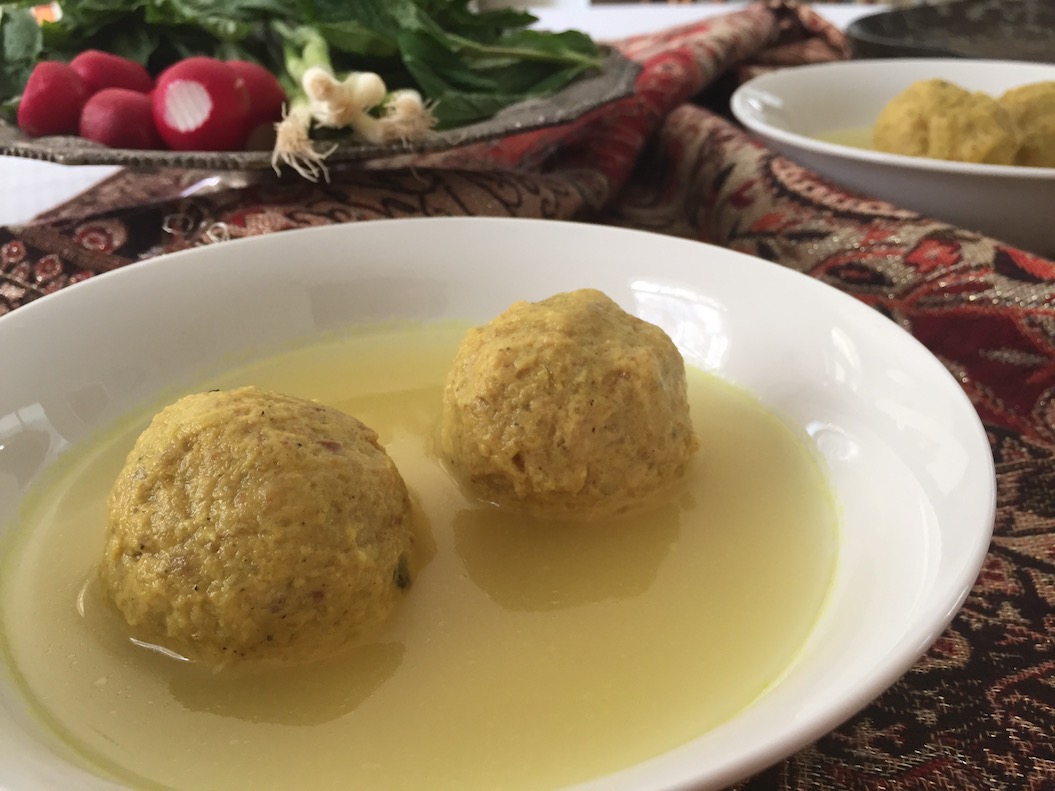 I was in the mood for a flavorful chunky soup to accompany our taco dinner. Mexican style sounded good, so I winged it using stuff I have at home. It’s really an easy soup that only takes 10 minutes of preparation. And it comes out delicious. We enjoyed it so much so now we have a new keeper.

Preparation:
In a large saucepan, heat the oil and sauté the onion until golden brown.

Add the corn including the liquid, the diced tomatoes with the juice, the chipotle, water, and spices.

Bring to a boil, lower the heat and cook for 20 minutes. Turn off the heat.

Add the chopped cilantro and top with some crunchy plantain or tortilla chips before serving.

Throwing food is something I try to avoid as much as possible. Almost everything we buy gets eaten or used this way or another. In this case, I’m referring to watermelon rind. Did you ever think it was edible? I didn’t think about it until a few months ago when a friend brought me some mysterious preserves she made. I couldn’t figure out what she could possibly had used to make the preserves. I was very surprised when she finally revealed her “secret” ingredient – watermelon rind. I enjoyed it, but when it was gone, I moved on with my life and completely forgot about it.

Yesterday, I brought home a watermelon. My husband cut it and placed the wedges in a special container, and we were left with a big amount of the rind. Just before we were about to dump it in the compost bin, my son reminded us of those preserves we all enjoyed, which gave me an idea. Try and make a savory dish using the rind as the main ingredient. I decided to go completely untraditional and use unconventional combinations of ingredients and flavors, and got some inspiration from a post I found in the blog Sumptuous Spoonfuls.

I think my creation came out pretty good…

Preparation:
In a medium bowl, combine all the sauce ingredients and mix well. Set aside.

Add the sliced mushrooms, the beans and the sauce. Lower the heat to medium-low and cook for 10 more minutes.

Two of my favorite ingredients, eggplants and lentils, are combined together in this interesting Turkish salad I found in an Israeli magazine. You may add this salad to a bed of lettuce to create a salad meal, or you can use it as a side dish. I ate it as my main dish as it already has the protein in it (lentils). I added some cooked veggies and a nice piece of homemade bread and I was a very happy camper. I discovered that this salad tastes best the following day. And oh, yeah, the cherry on the icing is crumbling some feta cheese (vegan in my case) on top when serving the salad. 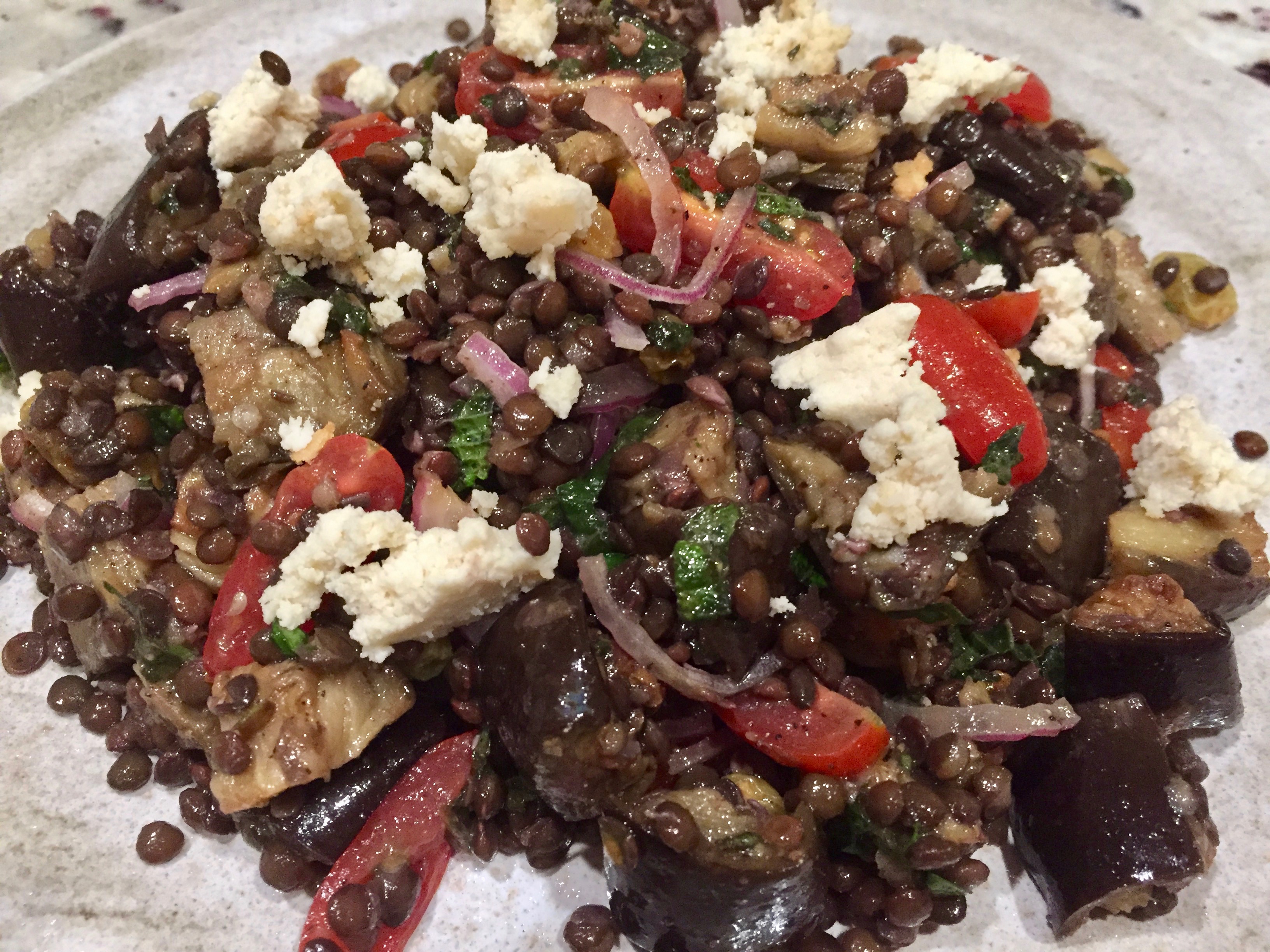 Preparation:
Heat an oven to 400F.

In a bowl mix the eggplant cubes with oil, salt and pepper. Spread them on a baking sheet and bake in the preheated oven until eggplants are nicely browned. Remove from the oven and cool.

Place the lentils and the water in a pot, bring to a boil and cook for about 25 minutes, until lentils are soft but not mushy. Drain of excess water and let cool.

The salad tastes better the next day, as the flavors get absorbed. 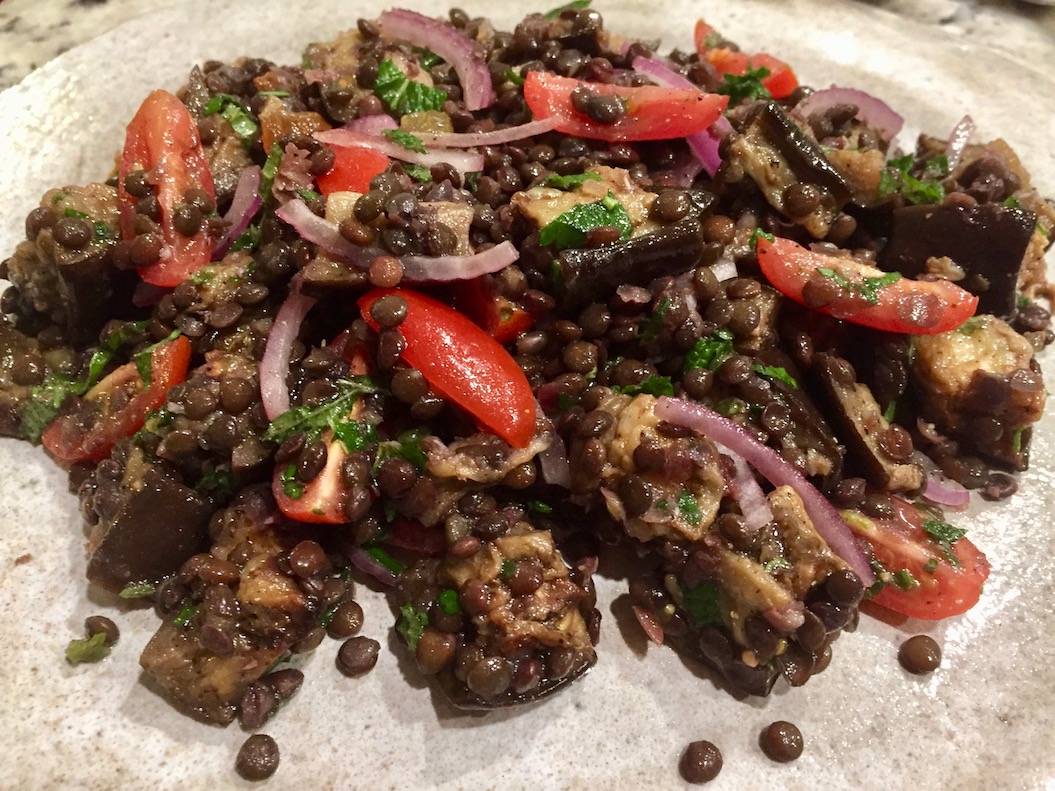 This salad is a good way for me to eat my kale as I’m not a big kale eater. It is also very healthy and yummy, so what more could I ask for? I first had it in one of the farmers markets I used to sell at in South Florida. I was attracted to the salad because of its vibrant colors and its refreshing look. I was indeed a happy customer once I tasted it, and so I recreated it at home, with some tiny changes, and now I get to share it with you as well.

Heat the oil in a saute pan and saute the sliced garlic on medium heat, until garlic is starting to brown. Remove from the heat.

In a large bowl combine all the ingredients and mix well. Allow all flavors to absorb for about an hour before serving.

I'm Tali - Israeli-born American with a very hungry husband and three very hungry kids. Thanks for visiting my blog!
I hope that you find it enjoyable and informative, and that you come visit again. Explore, enjoy, and get inspired!